pENTR223.1 plasmid -LC is a gateway cloning vector for bacterial expression. The vector is 3375 bp in size and contains the pBR322 origin of replication. This vector carries two genes, ccdB and CmR, in the region that will be replaced by cloned DNA segments. The ccdB gene (DNA gyrase inhibitor) provides strong negative selection against vector molecules that retain this region, while CmR (chloramphenicol resistance gene) provides positive selection for the propagation of the vector. The sequencing primers are T7, M13 and M13reverse. pENTR223.1-LC is resistant to spectinomycin up to 100 ug/ml.

Valuable collections of clones encoding the complete ORFeomes for some model organisms have been built following the completion of their genome sequencing projects. These libraries are based on Gateway cloning technology, which facilitates the study of protein function by simplifying the subcloning of open reading frames (ORFs) into any suitable target vector.

The expression of proteins of interest as fusions with functional modules is a frequent approach in their initial functional characterization. A limited number of Gateway target expression vectors allow the construction of fusion proteins from ORFeome-derived sequences but are restricted to the possibilities offered by their built-in functional modules and predefined model organism specificity. Therefore, the availability of cloning systems that overcome these limitations would be highly advantageous. 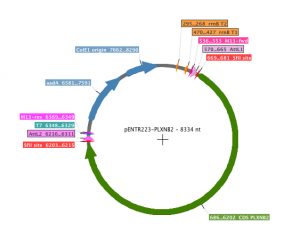 Adaptation of pEF5/FRT/V5-DEST for MultiSite Gateway cloning was carried out as described by Magnani et al, with modifications. Briefly, an LR recombination reaction was carried out at 25 °C for 16 h between plasmids pEF5/FRT/V5-DEST_CamS (see above) and pDONR221-R4-R3. Importantly, the attR4/attR3 sites in pDONR221-R4-R3 cannot recombine with the juxtaposed attL1/attL2 sites. After transformation of the reaction into code Survival™ 2 T1R competent cells, cultures were plated on LB/agar plates containing ampicillin and chloramphenicol to select for colonies harbouring the recombined pEF5/FRT/V5-DEST plasmid.

The PCR reactions were carried out with AccuPrime Pfx SuperMix (Life Technologies) as indicated by the manufacturer. Plasmids pDONR and the cloning vector PDT-R4-R3 were obtained as part of the MultiSite Gateway Cloning Kit (Life Technologies Catalog No. 12537023). The pEF5/FRT/V5-DEST destination expression vector was obtained from Life Technologies (catalogue #V6020-20). This is a vector for cloning and expressing proteins in FLP-In™ isogenic cell lines.

The expression of cloned proteins is driven by the human elongation factor 1α promoter located upstream of the Gateway cassette. The vector has an FRT recombination site that mediates FLP recombinase-directed integration of the vector into a unique homologous FRT site in the genome of FLP-In™ cell lines, and the hygromycin resistance gene acts as a selectable marker for integration. However, it behaves like any other expression vector in transient transfection experiments. 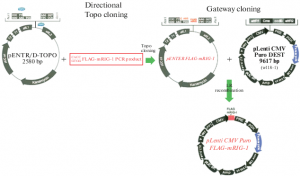 BP and LR recombination reactions were carried out with BP clonase II and LR Clonase II Plus enzyme mixtures, respectively (Life Technologies), following the manufacturer’s instructions. Reactions were stopped by the addition of proteinase K and incubation at 37°C for 10 min. All competent strains of E. coli were obtained from Life Technologies and used in a one-shot format for plasmid transformation. LB medium was supplemented where indicated with selection antibiotics at the following concentrations: ampicillin (100 μg/mL), kanamycin (50 μg/mL), chloramphenicol (50 μg/mL).

We present a versatile cloning toolkit for constructing fully customizable three-part fusion proteins based on the MultiSite Gateway Cloning System. The components of the fusion protein are encoded on the three integral plasmids of the kit. These can be recombined with any purposely designed target vector using a heterologous promoter external to the Gateway cassette, leading to in-frame cloning of an ORF of interest flanked by two functional modules.

Unlike previous systems, a third part is available for peptide encoding as it no longer needs to contain a promoter, resulting in a greater number of possible fusion combinations. We have constructed the component plasmids of the kit and demonstrated their functionality by providing proof-of-principle data on the expression of prototype fluorescent fusions in transiently transfected cells.

We have developed a set of tools to create fusion proteins with custom N- and C-term modules from Gateway input clones encoding ORFs of interest. Importantly, our method allows input clones obtained from ORFeome collections to be used without prior modification. Using this technology, any existing Gateway target expression vector with its template-specific properties could be easily adapted to express fusion proteins.

This entry was posted in Blog. Bookmark the permalink.